The origin of S-swimming action

Generally lures with bibs have a swimming action like rolling or wobbling, however, in the case of this bibles lure the JOINTED CLAW swims along a path like the letter S which has never before existed, S-swimming action causes both visual and also natural lure presentation along with strong stimulation of the predatory instinct of fish. Fish can be attracted from long distances and it is not uncommon for fish to keep attacking once the lure is found. 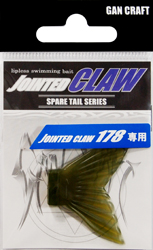